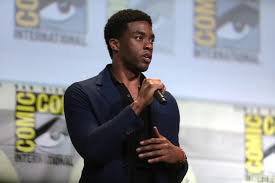 Chadwick Boseman was an inspiration and a real-life superhero. Boseman taught us that people can be a good leader and to be bold enough to change the game. He showed that they can become a superhero, a good cop/ detective, or an amazing baseball player.

Boseman fought for what he believed and what he knew was right. For example, he made sure that all the characters in Black Panther had the proper accents because Marvel wanted them to have British accents in an interview for The Hollywood Reporter in 2018.

“They felt like it was maybe too much for an audience to take,” Boseman said. “They felt like, ‘Would people be able to understand it through a whole movie?’ and ‘If we do it now, we’re stuck with it.’ I felt the exact opposite like, if I speak with a British accent, what’s gonna happen when I go home.

The world was shocked and devastated when Boseman passed away from colon cancer at the age of 43 on August 28.

Boseman was so unique. Fellow Marvel actors were amazed by his work. When actors had to do scenes with Boseman, they would have to step up their game so they could try to be as good as him.

“I realized I don’t think you can’t do it as convincingly as he did if he didn’t possess the same grace in real life,” Paul Rudd said in an ABC tribute to Boseman. “You can’t act like that.”

Boseman wasn’t only a superhero on screen but a superhero off-screen. He battled cancer while making seven wonderful movies and working with charities.

One of the charity works Boseman worked on was called #BlackPantherChallenge, which was to help Black children see characters that are exactly like them and become larger than life heroes. The charity haded up to one million dollars and had about two thousand screenings

Not many actors are like Boseman, giving all of their passion towards their work and still down to earth and very kind. A lot of people looked up to him for that reason and because he saw good in everyone.

Boseman left us sooner than we expected and we weren’t ready to say goodbye. He showed the world that if you’re kind and give it your all, then you can make a big difference.

As Boseman said, “You have to cherish things in a different way when you know the clock is ticking, you are under pressure.”

Rest In Peace Chadwick, we won’t forget you and what you’ve done for us.