PCC came out with their second win of the season when they went up against ECC Compton Tartars with a score of 21 to 0.

On Friday PCC badminton team faced the Tartars at the ECC Compton Center. Coming off their season opener victory, the Lancers added another win under their belts.

Coach Bill Sanchez looked relaxed as the matches were underway. Sanchez gave advice to the players about their swings. “Every game, regardless of the level of the opponents, you still have to focus and be game prepared,” said Sanchez.

Freshmen Kimberly Huffman never touched a racket prior to taking the badminton team. “I accidentally joined the class in fall,” said Huffman. She was trying to join another athletic class but she signed up for the badminton class. She soon enjoyed the sport and joined the team in spring. Huff enjoys badminton because the sport is non violent and the birdies don’t hurt when they hit you.

Freshmen Grace Espinoza, kinesiology major, showed little fatigue after her matches. She began playing badminton since high school. “The sport is a difficult sport than people say,” said Espinoza “takes both skill aspect and a mental aspect to play,” she said. Being able to get into your opponent’s minds and throwing them off their game. “[Badminton] is a unique and different,’ she said in response to other sports.

During practices, Sanchez focuses on what will benefit the players. “We don’t practice negative thinking or not achieving the task,” he said. 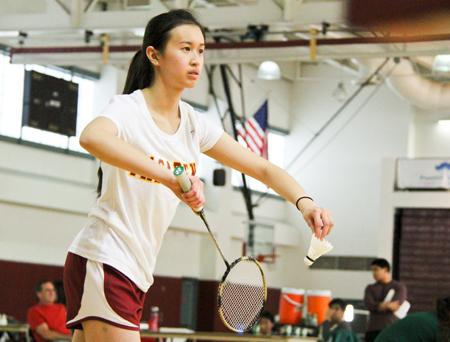