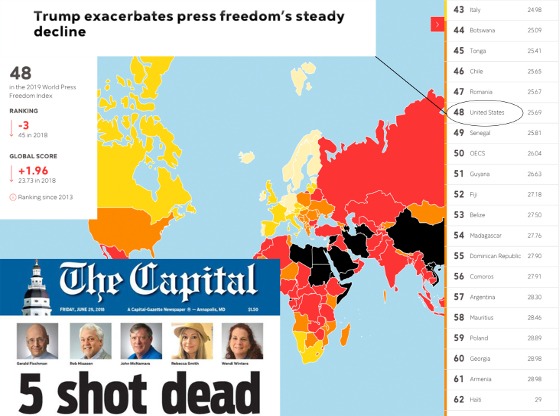 Ever since the Oompa Loompa’s rise to the presidency, much of America has suffered. One of the many underrepresented groups of people that have suffered are journalists – more specifically, their First Amendment right to freedom of the press.

Whether it be their actual right to freedom of the press being prohibited or the plague of misinformation muffling their voice, it isn’t the best time to be a journalist in America. With the amount of dishonorable scandals unfolding in the U.S., citizens can’t help but wonder what else government officials are getting away with behind the curtains.

“The US fell down the Reporters Without Borders (RWB) annual World Press Freedom Index and is now classified as a ‘problematic’ country for journalists to work in,” wrote Jim Waterson, media editor for the Guardian.

The US has become a problematic place for journalists because of Trump’s anti-media tactics. He believes the freedom of press is a privilege and not a Right, and he is taking a page out of Putin’s book. An integral part to democracy is now more at risk than ever before.

Several mainstream news outlets have been insulted by Trump, but his more recent verbal assault of the New York Times where he called them an “ENEMY OF THE PEOPLE” is a great example of his repeated verbal assaults and tactics against media organizations. The journalists at the New York Times wouldn’t be an ‘enemy’ if corrupt politicians didn’t have anything to hide, but their closets remain brimming with skeletons. Journalists are usually only nemeses to those undeserving of the office that they hold, and these are the institutions that hold him and many other politicians in-check.

Without journalistic efforts to dissect and explain current events and issues, citizens of the U.S. become less and less informed on what is going on in their country. When less people are informed on government events, there is weight in bogus headlines and statements from politicians because citizens don’t bother to read the articles.

“In demonizing the free press as an enemy, simply for performing its role of asking difficult questions and bringing uncomfortable information to light, President trump is retreating from a distinctly American principle,” NYT Publisher A.G. Sulzberger said. “It’s a principal that previous occupants of the Oval Office fiercely defended regardless of their politics, party affiliation or complaints about how they were covered.”

Journalists have to cover the President. When nothing but baloney comes out of his mouth, how can they do anything other than highlight his nonsensical ravings and inadequate job as a president? When you’re nothing but an undeserving bigot with a foul-mouth, the press won’t – and can’t – portray you as a saint. All that is left to do is criticize what he does wrong and he provides more than enough ammunition. If he did something beneficial for the people of America, he would be commended, but we would have to wake up from the dream we’re having first.

There is no special treatment for any President, but Trump has done his best to assure that his interactions and coverage with the press go his way; this hauntingly resembles the familiar tactics of an authoritarian government. Though the pedantry is embarrassing, his speeches and tweets nonetheless give us an in-depth look of how he has attempts to flood all media with distracting nonsense. After a while, people begin to not read and ignore whatever nonsense he has to say, but not everyone will – and that has consequences on the world stage.

“Donald Trump understands that they are an anarchic group,” said Hun Sen, Prime Minister of Cambodia, regarding journalists.

The fact that leaders like Hun Sen, who forced his country’s most prominent newspaper to close, is agreeing with what the President is saying about the press is alarming.

Journalists are not anarchists. They are the police to abusers of power. To corrupt politicians, journalists are threats because they expose them to the public for what they are. Without the police there is anarchy.

“If Americans increasingly ignore Trump’s words, foreign leaders don’t,” wrote NYT columnist Michelle Goldberg. “The world offers more lessons about how democracies grow weak and brittle than than how they can be revived. We’re not the only country that’s going to need it.”

It is the responsibility of American citizens to stay informed, but Trump’s anti-media model makes it very hard for journalists to help them accomplish this. We must try harder.

This is a key moment in American history. It may seem egregious to say that the U.S. is important in shaping global politics, but it is the truth. We are one of, if not the most important, democracies in the world and our freedoms are the cornerstone of democracy. We must combat the digression of American journalism, or else it will impact the entire world.

‘The Curse of La Llorona’: Leftover storylines and some Spanish
Magic airballs as Lakers president