The Lancers endured an unusual and frustrating end en route to an 85-42 pounding of East Los Angeles College on Friday night at Hutto-Patterson Gymnasium.The last several minutes of PCC’s decisive win over the Huskies left a bad taste in the mouths of players and spectators alike.

With his team down 57-35 with seven minutes left in the game, ELAC head coach Bruce Turner told his team to begin fouling the Lancers on every possession.

The plan backfired, as the Huskies were unable to take advantage of the extra time. PCC converted 28 of 44 free throws in that stretch to seal the rout.

By the end of the game, a total of 64 free throws had been shot by the home team, a school record. The 43 converted free throws also made the record book. The team’s free throw percentage for the game was 62.7 percent.

Before the second half, during which PCC was dominant, ELAC played the Lancers close.

The Huskies were on the board first and the lead fluctuated in the first nine minutes, but the Lancers took the lead at 11-10 and never looked back. The half ended with PCC up 32-25.

The Lancers played well despite being without their two leading scorers. Sophomore point guard Kim Smith, whose average of 18.3 points per game leads the team, missed the game with a foot injury.

Freshman center Dominique Scott, who averages a double-double with 15.8 points and 11.2 rebounds per game, went down with an ankle injury with eight minutes left in the first half.

The rest of the team was able to rise to the occasion in their absence.

Freshman Anna Shahinian led the way with 18 points and fellow guard Stephanie DeFrance added 12 of her own, with 10 of those coming at the free throw line. Sophomore center Cherisa Sellers led the team in rebounding with seven.

The Lancers also exhibited stellar defense. DeFrance stole the ball six times, and Shahinian had three steals of her own, while Sellers recorded both of the team’s blocks.

The defending state champions have not lost since a December 4 defeat at the hands of Fullerton, a streak of 12 wins.

They have been perfect since the fall semester ended, a stretch that has included a championship in the San Jose Tournament and a 3-0 record to open South Coast Conference play.

All Lancers home games can now be heard on lancerradio.org, which will be streaming the contests live. 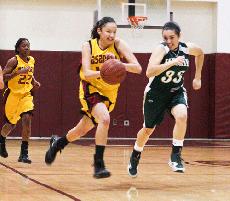