Over 40 volunteers comprised of students and faculty planted a new, more environmentally friendly landscape on Wednesday morning.The project, led by natural sciences professor Ling O’Connor, focused on transforming an island on the eastern edge of the quad from a grassy area into a sustainable garden.

The process of planting began at 10 a.m. and ended in the late afternoon, with the final touches being added just before sunset.

Volunteers from two PCC student groups, Seeds of Change and AS Sustainability Committee, teamed with students from La Causa, the East Los Angeles-based branch of YouthBuild, a national non-profit organization that helps disadvantaged youths rebuild their lives through rebuilding communities. Several professors as well as students just passing by also offered to help out.

“We had four days (to complete the design),” said Bergman, a former PCC student. “We bought the plants right after we got the approval.”

“We bought what we liked and designed around that,” added Adams.

The creators submitted their final design on Tuesday to O’Connor, who then sent it to Interim Vice President of Administrative Services Rick Van Pelt on Wednesday for final approval. The green light was given on Thursday.

Permaculture environments are being introduced to the campus through the “Landscaping the Future” project, which hopes to make the majority of the grassy areas on campus more drought-friendly by creating xeriscapes.

The two terms, which are new to many people and often times confusing, differ only in the means they use to achieve the shared goal of requiring minimum amounts of water to maintain.

Diversity is the key in permaculture, where plants of different shapes and sizes, mulch and other natural elements help the soil retain water and nutrients. Xeriscaping focuses on using plants, preferably native to the area that can survive without much maintenance, with gravel replacing mulch in the designs.

“All permaculture is xeriscaping, but not all xeriscaping is permaculture,” she explained. “Xeriscaping is just using low amounts of water,” which the new landscape will accomplish through the sheet mulch that was installed by the volunteers.

The layers of mulch that were set used items recycled from other parts of campus, such as cardboard from the dumpsters and green waste (such as branches) that had fallen from trees.

“It’s a way to work with nature,” said O’Connor.

The plants replacing the grass include guava trees, white sage, oregano, and myrtle, all of which have both aesthetic and practical uses.

“Most plants are edible or medicinal,” said Adams.

Those involved in “Landscaping the Future” hope that this new campus feature will foster awareness of what can be done to make PCC more sustainable.

“We want to make a paradigm shift by creating different ways of looking at things,” said O’Connor.

Added Recchia, “We’re trying to show what the alternatives are.”

“We hope this is the first of many (permaculture gardens),” said Adams. 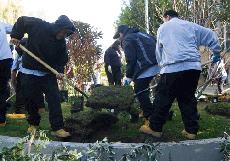 Volunteer students from La Causa joined with PCC students to make an island in the quad more environmentally friendly and sustainable on Wednesday. (Barbara Beaser)