`U.S. Rep. Adam Schiff told a PCC audience on Oct. 23 that under a Barack Obama presidency, community college would be “essentially free.”Schiff, who represents the 29th District, which includes PCC, said that under Obama’s planned American Opportunity Tax Credit, students’ first $4,000 of college tuition would be free, if they commit to 100 hours of community service.

“It would be free in the sense that you wouldn’t have the tuition to pay. But it wouldn’t be free in another sense. He wants this to be a bargain, a compact between young people and the rest of the country, so [Obama is] going to ask for community service,” Schiff said.

Before fielding questions, Schiff, who’s expected to secure his seat in the House for a fourth time this election, also spoke on the ongoing economic crisis, the national and global impact of an Obama presidency, and the high stakes in the Senate this election.

Schiff said congressional “oversight was going on as we speak” to ensure the money injected into the market in the economic bailout was being properly funneled.

Discussing the lead up to the bailout, Schiff said Federal Reserve Chairman Ben Bernanke and Treasury Secretary Henry Paulson were mistaken in framing the economic crisis in terms of a second Great Depression months ago. Such talk, he said, played a part in causing confidence in the financial markets to be shaken.

“We do have a severe economic crisis, but we’re not headed for the Great Depression – we’re not going to have 25 percent unemployment, soup kitchens, massive dislocation, and a structural, decade’s long problem. A lot of what we have is a crisis of confidence,” Schiff said.

Forecasting the international impact of an Obama presidency, Schiff rebuffed conservative criticism that a presidential nominee “who’s popular and well-thought-of around the world” is one who kowtows to “European sensibilities.”

“It’s not about being popular. It’s about our own national security and our own ability to build coalitions. Whether it’s to stop Iran’s nuclear program, or to curb Russian aggression, or to try to turn back North Korea’s nuclear program, if we can’t compel respect and don’t have a call on the affections of other nations, it’s very hard to lead in this increasingly small, global, often dangerous world,” he said.

Schiff was hesitant in his expectations for a Democratic filibuster-proof Senate after the election, but said inching closer to the full 60 seats would help push stalled bills forward and make “even more substantial investments in renewable energy” possible.

“If we make the right decision about our energy future it’s an unmitigated winner. It’s a national security winner, because we suck the profits away from the belligerent regimes that are using them for things that are antithetical for peace in the world and prosperity in our own national security interests,” Schiff said, citing the governments of Iran, Russia, and Venezuela as examples.

Offering tax incentives to solar, wind, and geothermal industries would serve to reduce our dependency on foreign oil and on our own dwindling supply, Schiff said. To offset the costs, tax credits currently given to the oil industry would have to cease.

As Schiff’s hour-long discussion concluded, Sara Tavakoli, 20-year-old international relations major, said she was particularly impressed with his concentration on pursuing alternative fuels. “I love that he’s so attentive to finding energy alternatives. He’s clearly passionate about the issue,” she said.

The event was jointly sponsored by the College Democrats and the United Nations Association Club. Reflecting on snagging Schiff to speak, College Democrat president John Shannon said he was “incredibly excited and honored to have such an esteemed member of Congress come to our campus and take our questions. 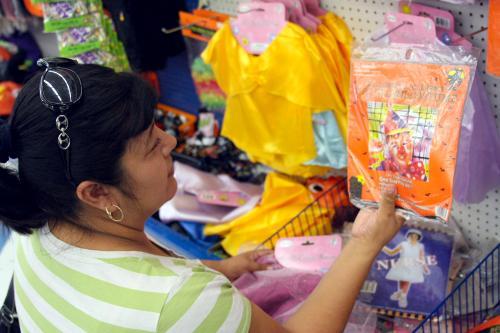 U.S. Rep. Adam Schiff greets a student after speaking in support of Barack Obama on Oct. 23 at PCC. (Jeremy Balan)