Lancer track and field teams are making their way into the new season geared for what is sure to be an even faster-paced season then last year, despite injuries and the loss of previously crucial members.After the men’s team ended the 2010 year off as 31st in State and 21st in Southern California, and the women’s ended 20th in State and 15th in Southern, the teams continue to have high expectations for themselves.

This year, Ernesto Rodriguez, ranked 10th in state during the season and went on to be crowned South Coast Conference champion in the 3,000-meter steeplechase, will not be wearing the Lancer jersey, but he will serve as a trainer for the rest of the Lancers. While his loss will be felt on the scoreboard, the rest of the team has continued the rigorous training.

“We never really stopped, track is all year round. We have our season, then we have off season training,” said second year team member, Christopher Carias.

Coach Armand Crespo, in his fourth season back with the team approaches the season with optimism. “We’re shooting for the podium, and that’s top three,” he said. “We never know though, and don’t want to get ahead of ourselves.”

Track and field, however, is far more than meets the eye. Coach Crespo breaks down the training strategy into three phases meant to meant to get the team competition ready; “endurance, speed in long intervals, and short distance speed,” he said.

Tracee van der Wyk, 1,500 meter runner and southern California SCC Individual Champion, has a good chance of being women’s state champion in either 1500 or 800, according to last years steeplechase champion Rodriguez.

Zarazua himself has become one to watch as he is has had continued success on the track and stands to be on the charts for the 1500 meter event.

Injuries, however, may prove a hurdle this season, Rodriguez said, there have been breathing problems for distance runner, Richard Zarazua, and two stress fractures on a woman’s and men’s team member.

Whether winning or losing, the team’s humor is intact. “My legs look great in running shorts and Jesus-like abs,” said freshman runner Steven Zarazua who plans to race in this year’s 3000 meter steeplechase. 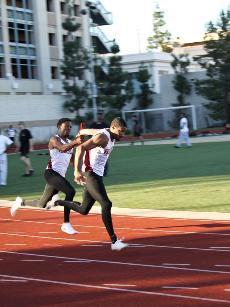