At least 50 students rallied in front of the C Building on Wednesday as a “Day of Action at PCC” to protest against Gov. Jerry Brown’s proposed budget cuts and save public education.Members of The Coalition to Defend Affirmative Action, Integration & Immigrants Rights and Fight for Equality By Any Means Necessary (BAMN) stood on top of the steps leading up to the C Building and chanted “They say get back” to which other members responded, “We say fight back.”

“We feel like this is a political attack on the Master Plan that’s being made by Gov. Brown,” said BAMN organizer Caroline Wong. “We feel like we have to take a stand. Just because he’s a Democrat, we cannot sit back because it’s suicide to just not take a stand around these things now. These cuts are deeper than have been made before.

“Some people say that there is money in funds here at the community college,” Wong continued. “There is money, but given the depth and severity of this attack, there isn’t enough money in these different funds to make up for the kind of cuts that are coming down the line.”

Nicholas Smith, biology, is not a part of BAMN and believed that the group’s concerns are more general whereas the students’ are more specific.

“I think the students have different opinions,” he said. “It’s bound to happen. Not everyone agrees on everything.” Smith, who spoke at a College Council meeting on Feb. 23, said that he is satisfied with the cuts and Brown’s proposal.

“I think that one major thing that [BAMN] is not doing is realizing that the enrollment cuts are exactly correlated with the budget cuts,” he said. “They refused to propose both of them at the same time and highlight that there are different budget manipulations that can occur that won’t cut student enrollment as much.”

Smith spoke about the PCC Faculty Association’s newly ratified contract that includes a retirement incentive that, depending on how many eligible faculty members take advantage, could save about $4 to $5 million, according to PCCFA President Roger Marheine.

“If that occurs, I’m for it,” Smith said. “I think [Marheine] is very hopeful and I don’t mean that in a negative way. But I think there’s probably going to have to be other cuts as well. They can cut from a lot of different places, maybe even the administration’s salaries.”

Ron Duarte, a sociology major, did not agree with the cuts either but also said that the student involvement may not lead anywhere.

“I haven’t researched the subject enough, but the administration should at least give students more leeway,” he said. “This isn’t England. This isn’t France. France’s whole sociology is rioting, but America’s sociology is to be content and accept what [we] have. So many people showed up for May Day but it didn’t change much.”

Though there are different opinions on the cuts, Karen Conde, art, believes “[the cuts] are hard on everybody.”

Conde was passing out stickers for a group called Answer, a national non-profit organization focusing on social justice. She shared her personal experience about how the cuts have affected her when she was kicked out of one of her classes because she was 15 minutes late on the first day.

Students planned to attend Wednesday’s Board of Trustees meeting to continue to voice their opinions in a public forum. 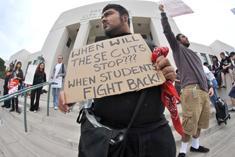 Lawrence Gandara, 22, English, carries a sign during the student protest against Gov. Jerry Brown’s proposed budget cuts in front of the C?Building on Wednesday. Below, student BAMN organizer Caroline Wong leads protesters on a march around campus to draw (Louis C. Cheung)