A technology update is underway on campus, with hopes of completion before June 2013, according to Vice President of Information Technology Dwayne Cable.

The “Smart 18” plan has three components; all 264 classrooms will become ‘smart’ classrooms, numbers according to the Director of Institutional Effectiveness, Crystal Kollross. In addition, all full time faculty will have desktop computers replaced with laptop docking stations, and all adjunct faculty will “possibly acquire laptops they can check out,” said Cable.

“There’s a tech master plan,” said Cable. The plan includes a Leverage Technology Advisory Committee, “made up of two representatives from [each of the 14] academic divisions,” he said. To upgrade each classroom, smart boards, laptop docks, projectors with cameras, and screens will be added.

The laptop docks will be connected to the podium as well as the PCC network. “[Faculty] will be able to unplug [their laptops] and walk out of the classroom,” said Cable. Instructors will be able to bring their laptops to class and just plug them into the docks provided. This will help keep each faculty members’ information with them at all times, instead of on a desktop in a classroom that other faculty members have access to, according to Cable. If a teacher does not have a laptop, one will be provided for him or her. “[Faculty] has a choice between Mac or Windows…I want them to have what they are comfortable with,” said Cable.

Another possible update is the introduction of pasadena.edu e – mail addresses for each student enrolled. Many students already have at least two e – mail [accounts] according to Cable. “It’s most likely to roll out by fall…I mean heck, I have four or five e – mail [accounts] myself!” said Cable.

Upgrading the PCC website was a high priority for Cable. “Oh look at this! This is just awful…we’ve been working like crazy [to update the website],” he said. A web advisory team of about 20 volunteers is fixing current data and redesigning the website to make it more user friendly. Cable has also been working with President Mark Rocha and Vice President Van Pelt to update information on the website.

Rocha explained in person that the PCC mobile app is also already running, with the PCC website available on smart phones.

According to Vice President Richard Van Pelt via e – mail, the classroom upgrades “will be [paid for by] the General Obligation Bond, Measure ‘P’. The money cannot be used for any other purpose than was approved by the voters ten years ago [at PCC],” he said. The Measure P bond is used for the construction costs for the buildings on campus. 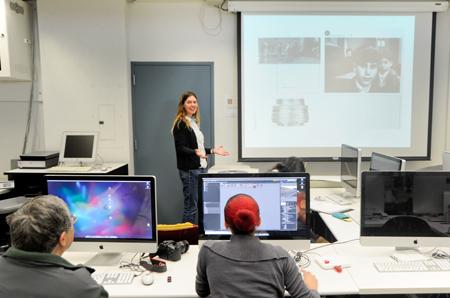 Amy Oliver, instructor of Photography 31, utilizes her Smart room in the R Building to aide in her explaination of f-stops to Peter Geissler, English literature and Jennifer Gonzalez, photography, March 19, 2012. (Wells / courier)