A proposed budget from California Gov. Jerry Brown that will slash the community college system budget by $400 million also proposes an increase in tuition fees from the current $26 to $36 per unit. Students’ views on the plan vary widely.Associated Students Vice President of External Affairs Alexander Soto said during an Associated Students meeting that “it’s a balanced budget but it’s a hard pill to swallow.”

But according to Soto, the budget comes at a time of recovery.

“It’s part of California that’s helping to move it forward,” Soto added. “I’d accept the fee with a bit of reluctance, but in the end, we’ll still be moving in this direction.”

Other students, however, found the budget to be appalling, impaired by shaky politics.

“It’s a bit of a shame that education gets cuts before any other services,” said history major Eddie Organista. “The state complains about low test scores… It’s a big contradiction.”

Organista, along with many other students, is supported by the fee waiver, which was developed to assist California residents to pay for tuition fees. According to Organista, having to pay the extra dollars is taxing.

“Just because I get the fee waiver doesn’t mean it doesn’t affect me,” Organista said. “In the long run it gets silly.”

“I’m not bothered by it as much as I think I should be,” she said. “It’s just a few more dollars and financial aid covers me.”

“It’s crippling our foundation. You’re taking money away where people start,” said Alex Yarijanian, social psychology major. “We should be considered people instead of a deficit area on a pie chart.”

For psychology major Lara Sepanocian, the money that’s being taken away should’ve been allocated in funds to help community colleges.

“Taking away as much as $400 million is ridiculous,” Sepanocian said. “America needs to think about the students and teachers. Especially the teachers! We need to pay them!”

For Industrial and Organizational Psychology major, Lernik Elle Sepanocian, however, the budget wasn’t as much of a surprise.

“I’m not surprised, as sad as that is for me to say,” Lernik Sepanocian said. “But if I’m paying $36 for my education, I better get coffee with it. 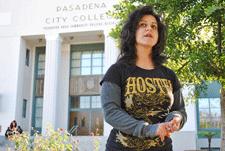 Amber Lu/Courier Lernik Elle Sepanosian, Industrial Organizational and Psychology, discusses about the 38 percent fee increase proposal to $36 and how it affects her. (Louis C. Cheung)