Coming off a successful 2009 season, the PCC women’s softball team is looking to return this spring to better its 20-19 overall record and crack the South Coast Conference playoffs.With 12 new additions to the team, head coach Elaine Martinez, now in her fourth season, says she expects her five returning players to lead the team with their experience.

“This season’s all about building,” said Martinez. “Last season we were just a few games short of the playoffs and so the girls are really gunning for it this year.”

The Lancers placed fifth in the SCC with a 7-11 league record.

The team also celebrated a first-place finish in the Golden West Tournament, a first in the college’s history.

“[Me and the other coaches] feel like we brought on the right players to build on last year’s experience,” Martinez said. “There are a handful of girls who can explode, and whom I expect to see good statistics from.”

Jenna Martin, an incoming freshman, is expected to pitch.

Sophomore Amber Frame, who stood in as pitcher for most of last season, will be returning to her strength as a third-base player.

Another player to look out for is returning sophomore Marissa Rangel, in center field.

“I want to see this team perform to the best of its ability,” Martinez said. “Right now it’s about staying healthy and staying ahead in the classroom.”

Martinez cited strengthening the defense as the primary target for the team, in addition to making sure the incoming players are learning and becoming more comfortable in their new positions.

“Defense is going to have to be a strength,” she said. “Offensively we’re going to hit a couple of runs but once we bring up our defensive presence the team will be much stronger and more well-rounded.”

The team kicks off its 2010 season on Saturday with a double header against Palomar College in San Marcos. 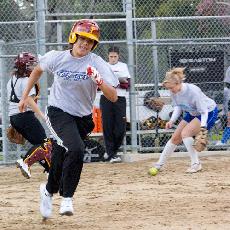 Freshman Kristen Miranda runs to first base during a team scrimmage at a recent practice for the PCC?women’s softball team at Jefferson Park. (Barbara Beaser)