“Suffice it to say here that the Times reporting on West Los Angeles College is utter nonsense,” Rocha said.

The Times accused Rocha of spending money irresponsibly by approving millions of dollars in construction project upgrades while serving as the president of the already financially struggling West L.A. College.

“Through his lawyer,” the Times reported, “Rocha said he did not approve any project unilaterally and rejected what he said were efforts to blame him for overspending.”

The district claims that LACCD’s Building Program is one of the most “heavily audited and examined in the history of public construction, has been found over and over again to be well-managed, careful with taxpayer dollars, and committed to innovative management and reducing impacts on the environment.”

The article also alleges that Rocha “helped his wife land a job” with Jacobs Facilities, Inc., a contractor at another college within the Los Angeles Community College District.

During the Monday meeting, Rocha read the statement that was handed out then spoke on the matter.

“[LACCD] has made a long response that basically says the article is misleading,” he said. “You cannot move the college forward unless you’re in a completely open environment.”

Rocha then joked that “if you ever need to talk to the press, don’t, because it’s not going to come out right.”

Rocha said that he had a 90-minute taped interview with the Los Angeles Times, which resulted in 20,000 words.

“In the paper, they quoted 19 of my words,” he said. “They did not, for example, quote the part that my wife doesn’t use my last name and they had no way of knowing who she was when she interviewed for the job.”

The Times article focused on the nine colleges in the LACCD and accuses officials at the schools of using millions of voters’ dollars irresponsibly.

According to the article, the LACCD raised $5.7 billion through several bond issues to rebuild every campus. 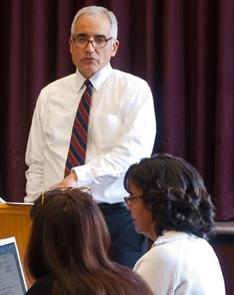