Skip to content
By: Alumni Staff Posted on November 18, 2009

The performing arts and communications division hosted “Opera Scenes” at Harbeson Hall on Friday to showcase the students acting and singing in the event. The show featured students singing and acting famous scenes from different operas. Like “La Serva Padrona”, “The Magic Flute”, “The Pearl Fishers”, “the Old Maid and the Thief” and “Hansel and Gretel.”

The first half of the show featured “La Serva Padrona” with chemistry between actors Meline Ambartsumyan and Mike Davis in comic scenes. They played their roles well.

One of the highlights was by Sashell Beck, PCC alumna and current student at Cal State Long Beach who was in “The Pearl Fishers” scene.

She showcased her amazing voice, putting emotion into her character.

Some of the audience fell in love with her performance, especially with her powerful voice.

Charla Robertson, a film major was one of them. “Sashell Beck stood out to me the most, she captures everyone’s attention. Listening to her beautiful voice, she did a great job,” she said.

Beck was happy with the audience’s response to her performance.

“I think that performance was amazing and I’m happy to have a positive reaction from the audience,” she said.

The second half was just as good as the first half. The performers did a great job.

The finale of the show, featured the full cast showcasing their voices.

“The performers’ voices were all well-balanced. None was singing higher than the other,” Robertson said.

The opening night show had to go on without one of the actors Derek Rue, who was ill.

Director Ketchum was proud of the opening night show despite Rue’s absence.

“It’s difficult but they all did a wonderful job as they had to sing and act, they pulled it off,” she said.

“Opera Scenes” displays talent on campus. The students all worked like professionals. 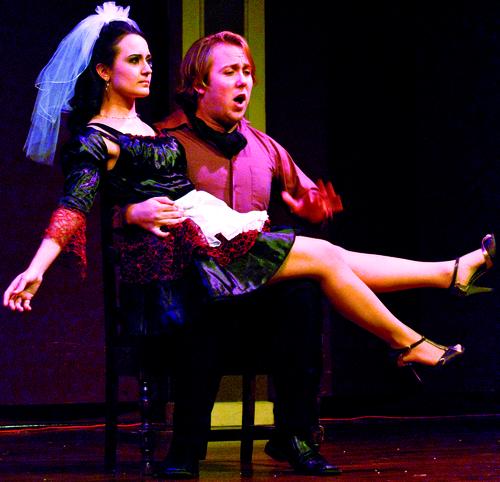