In tribute to the effervescent folk theme of the night, the students and staff of PCC’s Music department performed “Suites to Sambas” on Friday, April 15 in the Sexson Auditorium where music instructors took to performing for the surprised audience.The show opened up with the college and community concert band and their tune of a sea shanty composition that featured a variation of meters and a suite composed up various renditions of recognizable jingles.

“[The band] performed at the peak of their form,” said college and community band conductor, Paul Kilian.

“They came to rehearsal at 7 p.m. and put out a great performance.”

“There’s a nice variety with blues vocalists and contemporary pieces.”

Performers also included the Lancer Concert band led by conductor, Kyle Luck and assistant conductor Tad Carpenter. The band performed many moving numbers such as “Lux Aurumque” that Luck described as an “absolutely beautiful piece of music” and ended their performance with “Turkey in the Straw,” a contemporary piece that was featured in Disney’s Steamboat Willie.

“Suites to Sambas” ended its repertory with the Lancer Jazz big band, featuring a number of student soloists and performances from Luck and Carpenter who handled the percussion.

“I thought it was a great performance overall and [the bands] did a fantastic job,” said student Aaron Oropeza, Nursing.

The performance featured a program with timeless tunes and memorable melodies that not only stayed true to its folk theme but showcased the talents of the musicians. 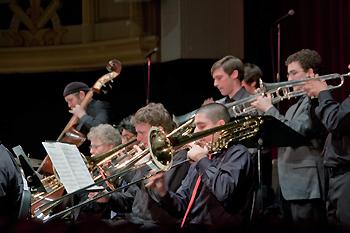 The Studio Jazz Ensemble during the “Suites to Sambas” Concert in the Sexon Auditorium on April 15. (Louis C. Cheung)