The LGBT slam poetry group, Sister Spit, hosted by Queer Alliance, performed in the Circadian Lounge on March 22, cracking up students and sharing stories and art about LGBT sexuality. The line-up consisted of Miriam Guerra, Michelle Tea, Marin Naomi, Allie Liebergot, Blake Nelson, Amos Mac, and Kirk Reed. The readers all had their own pieces which they wrote based on their past experiences.

In addition to the slam poetry readings, Amos Mac, editor-in-chief of his own trans male magazine, Original Plumbing, showcased his artsy photography skills in his latest quarterly issues. “Sister Spit gave me an opportunity to reach out to the gay community,” said Mac.

Tea read from her novel, Rose of No Man’s Land, giving the audience a good laugh and teaching the females a new defense mechanism. Naomi showed off her artistic skills with her drawings, which coordinated with her story.

Michelle Tea and Sini Anderson founded Sister Spit in San Francisco in 1994. Their goal was to start one of the first queer/feminist tours, giving writers a chance to express themselves.

“We started Sister Spit because we wanted to do an open night for the girls,” said Tea. “There were many slam poetry groups that were a bunch of men who bashed their girlfriends in San Francisco, so we wanted to start a feminist tour.”

Sister Spit: The Next Generation tour is new for many of the readers and can be exhausting. This is the first Sister Spit tour to have male readers.

“The hardest part is traveling because you have to keep up with the schedule,” said Liebergot.

The tour was funded by a James Irvine Grant, which gave Sister Spit the opportunity to travel around the nation and reach out to small gay communities. 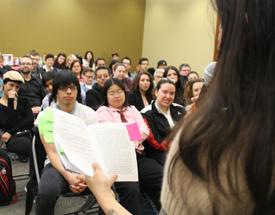 A contributing reader shares her writings with an attentive audience at the Sisters Spit performance hosted by the Queer Alliance on March 22. (Louis C. Cheung)