Laughter and giggles resonated from the walls of Room 204 of the V Building on March 30, when Johnny Deluxe – in the middle of a presentation – told students of his “piss technique.”A British punk artist, Deluxe embodies the anarchist bravado of the punk society in the 1970s. “I don’t do this to make money. like my old friend once said, ‘for most artists, its not for fun, its an illness, a compulsion,'” he said.

Deluxe burnt his first silk screen of a policeman after being arrested for burglary in 1978. Deluxe had been sneaking into his school to write messages in bathroom stalls, and on blackboards, when he decided to take a ruler with him this time, landing him in jail. He wanted to show how unjustified his incarceration was, and went about printing T-shirts.

Deluxe doesn’t sell his shirts commercially, but uses “any old viral means” to distribute them, like giving them to friends to wear, or jumping in for a street vendor while he’s on lunch to sell them as quickly as possible before the vendor gets back.

In the screen-printing lab, John Miner, an old friend and associate of Deluxe, now an instructor at PCC for poster art (who visited with Deluxe in London several times), presented him to the students of Kris Pilon’s screening class, David Cuatt’s Computer Science class, and interested spectators and fans.

“No matter what, no censorship – what makes me uncomfortable is ignorance, intolerance and bigotry,” said Deluxe, who was also to appear at the Heart On exhibit at The Airliner on Broadway in Lincoln Heights on Sunday.

Being his first appearance a”t PCC, aspiring screen printers were excited and full of grins to talk and listen to the witty, funny, whimsical Deluxe. 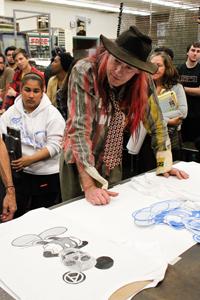 Johnny Deluxe, British punk artist, observes screen-printing made with his design graphics during the demonstration in the screen-printing lab on March 30. (Louis C. Cheung)