To some, giving up meat seems downright impossible. Juicy hamburgers and crunchy fried chicken are the staples of their protein packed diets and they would inevitably starve in a meatless world. Others are the complete opposite and gag at the thought of steak or even milk. This represents the stark difference between omnivores and herbivores in modern society.From nutritional to ethical or even environmental, more and more people have found reasons to give up animal products and go vegan.

There are different levels of vegetarianism according to nutrition professor Melineh Khachekian who claims, “a well planned vegetarian diet can meet all the nutritional needs at all stages of life”.

Semi-vegetarians give up only red meats and continue to eat poultry, pescatarians give up all meat except fish, and some decide to give up meat altogether according to Khachekian.

One step beyond vegetarianism, vegans choose to exclude all animal based products from their diet and often their wardrobe and beauty supplies as well. This means no milk, no cheese and no leather shoes- even honey is kicked to the curb.

Environmental Science Instructor Erika Catanese is an ovo-lacto vegetarian, which entails excluding meat from her diet completely while including eggs and dairy. She emphasizes the environmental cost of the meat industry. “The conversion of feed into animal protein is very inefficient and there simply is not enough arable land to grow animal feed for our world population to be fed without compromising plant food crops for people,” she said.

“If someone feels passionate about animal welfare and the environment, [veganism] may be something that could relieve them of the guilt that is often associated with eating animal products,” said Catanese.

Associated Students’ Vice President of Sustainability Hanna Israel has been a devoted vegan for six years and feels very strongly about her dietary choice. “I do not believe that humans have sovereignty over animals or the environment,” she said enthusiastically.

Cheslea Pack, Associated Students’ vice president for public relations and a pre-veterinary medication major, is also a devoted vegan. She had been a vegetarian for ten years until a little over a year ago when she decided to give up all animal product and become a vegan.

“Adopting a vegan diet is difficult but if you have a good reason and self-discipline you can stick with it,”Cheslea Pack said.

According to Khachekian being a vegetarian has it’s pros and cons. “A poorly planned vegetarian diet can cause an imbalanced calorie intake as well as vitamin and mineral deficiencies,” she said.

But, Khachekian stated that vegetarians have been shown to have lower body weight and low cholesterol as well as reduced rates of heart disease, diabetes and some forms of cancer. This all attributed to a heightened consumption of grains, legumes, fruits and vegetables. 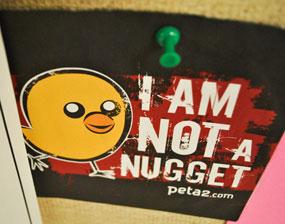 Amber Lu/Courier A “I am Not a Nugget” flier is posted on the bulletin board on the first floor (Performing and Communication Arts) of the C Building. (Louis C. Cheung)