Skip to content
By: Alumni Staff Posted on November 18, 2009

The season ended on a cold night in Glendale. In the final game, Lancers kept tradition alive by defeating the Glendale Vaqueros 38-22 on Saturday. The Lancers have defeated the Vaqueros in 28 consecutive games.Quarterback Nick Ponce led the Lancer offense throwing for 371 yards and two touchdowns. The Lancers scored on their opening drive, Ponce ran for 17 yards to score the first touchdown of the game.

The Vaqueros relied on the blitz and totaled five sacks, the Lancers did capitalize and used the Vaquero blitz to their advantage, completing long strikes of 51 and 39 yards.

Sean Carroway enjoyed the single coverage down the field, catching nine passes for 172 yards and a touchdown.

The Vaqueros first score came on a safety, then they scored again when Ponce threw an interception that was brought back 45 yards for a touchdown. Will Youngblood ran for 124 yards and a touchdown for the Vaqueros. Youngblood is a Pasadena resident who chose to go to Glendale.

The once promising season turned ugly once division play started. The Lancers jumped out of the gate winning three of their first four games. They started divisional games 0-3 and ended up 2-4 in their division.

Pines had a great game against the Vaqueros rushing 16 times for 99 yards and two touchdowns.

His longest run came in the third quarter when he shed multiple tackles for a 40 yard gain, that led to a one-yard touchdown scored by Pines.

According to Acting Head Coach James Kuk, Montana will not return next season but there is a lot of returning talent.

“Montana is probably not going to come back, but we have Reuben Thomas, Kemonte Batemen, Kyle Bailey and Bryan Hammad. Their a solid core we could build with. The experience they got this year will help them for the next season,” said Kuk.

Running back Pines averaged 44.9 yards per game and scored five touchdowns in the season.

He has conflicting feelings about the season.

“I know this season was long and we struggled at times, but I know we are better than that. I would have liked to keep playing more games so we could really show them what we are capable of. I will be transferring after the season and as much as I can’t wait for new beginnings, I will be sad to leave PCC,” said Pines.

Aguilar, who led the team in tackles with 95, was excited about playing his last game as a Lancer against Glendale.

“We have a tradition of beating them. I didn’t want to be a player who lost to Glendale.”

“Tonight I wanted to leave it all on the field and end my Lancer career with a bang,” Aguilar said.

Kuk was optimistic about the next season and what was learned this season.

“We learned a lot from each other this season. We rallied together through injuries and finished strong.”

“We will come back better and stronger next season and build on what we learned this year,” said Kuk.

Ponce for the season had a quarterback efficiency rating of 152.33 and threw for 1582 yards and 15 touchdowns through seven games. 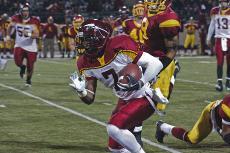 Sophomore running back John Roberson speeds up the sideline after a hand off in the Lancers’ final game. (Michael Cheng)