PCC President Mark Rocha is firmly opposed to a ‘time, place, manner’ policy that would limit protests and demonstrations on campus.

“I don’t see any need for it,” Rocha said when addressing journalism students March 15. Rocha also said, however, that there is an appropriate time for protests and that the protesters in February were not dealing with the real problem and were just expressing anger.

“Once expressed, you have to deal with the problem,” Rocha said.

“I really feel that the protests are valid, but you have to direct the protests at the right place.  These funding decisions are made in Sacramento.”

Rocha said that the problem is not PCC, but the economy, and that the solution is to fund education.

“If you fund education, the better you will be able to fund everything else,” Rocha said.

The ‘time, place, manner’ policy has been a controversial topic of discussion before and was ultimately shelved last year by the Academic Senate. At the Board of Trustees meeting on March 7, mention of a revival of the policy by Board Vice President John Martin drew wide attention, prompting students to write letters of disapproval.

“While it may be true that the board felt ‘threatened’ by the protests, that does not give them the right to limit our freedom of speech,” wrote student Andrew Bott in a letter to Rocha, the Board of the Trustees, and various news organizations.

Both Board President Geoffrey Baum and Rocha have denounced talk of reviving the policy.

“There is no desire or attempt to restrict freedom of expression at PCC,” Baum replied to the letter. “However, the board is responsible to protect the safety of students, faculty and staff.”

“Who opposes freedom of speech or student safety?” Martin wrote an email to the Courier. “Let’s encourage both.”

A proposal for a three-semester academic calendar without a winter intersession was another topic that Rocha discussed with the journalism students.

“Because of state budget cuts, there have been fewer and fewer classes in [intersession] semesters,” Rocha said. The proposal now is for a ‘trimester’ calendar where the classes in winter will be absorbed by the fall, spring, and summer semesters.

According to Rocha, the absorption of the winter 2013 interession is not a way of cutting classes as it will “make more classes available.”

“You might not be getting everything you wanted, but you’re getting a bit of what you need,” Rocha said to the students. “The college is still open, classes are still open … as hard as things are, there’s always hope.”

The trimester proposal is just one of many negotiating positions by the administration.  Others concern salaries, cost of living adjustments and the “Carnegie Hour.”

“This is all a proposal to the union,” Rocha said, “and is the proper way for the Board to approach the situation.”

According to Rocha, integrating the “Carnegie Hour” will streamline the registration process by preventing overlapping class schedules.

Despite a dire budget situation, Rocha said that there are no plans to cut salaries or benefits for the faculty at PCC as “it is not the district’s goal.”

The three-semester proposal is one of three measures that was presented at the Board of Trustees meeting on March 7. The topic, however, was not up for board discussion because according to General Counsel Gail Cooper, the public needs to understand the proposal before it can be detailed.

The proposal will be set for a public hearing at the April 4 meeting of the Board. 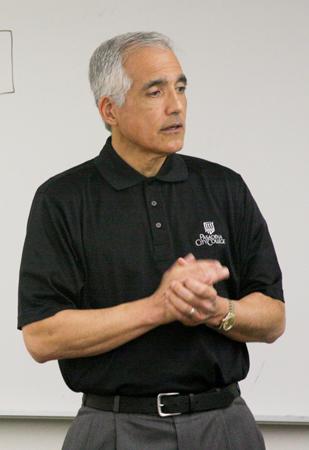