Students and staff of PCC’s Performing and Communication Arts Division showcased the musical, “City of Angels”, on its opening day, Thursday in the Sexson Auditorium with an exhilarating performance from its cast and crew.”City of Angels”, directed by Whitney Rydbeck, opened up with a whimsical and lively prologue from its “Angel City 4,” Soprano Bethany Burch, Alto Jessica Young, Tenor J. Cody Clark, and Bass Dino Battaglia, who set the ecstatic feel of the musical in their number, “City of Angels Theme.”

The place was Los Angeles; the time was late 1940s as the story follows aspiring writer, Stine, played by Alexander Mashikian, whose book, City of Angels, is in the process of being written into a screen play. While trying to maintain the true essence of his writing, Stine is under pressure to revamp and tweek his story for the liking of obnoxious Hollywood producer and director, Buddy Fidler, played by Ian Federgreen.

The charm of the play makes its way as the scenes shift from the reality of Stein’s struggle of adapting a screenplay to the fictitious world of the movie in motion based on what has been written.

The movie, which seemingly parallels reality, depicts detective Stone, played by John Warner, who is set on an investigation to find the missing step-daughter of Alaura Kingsley, played by Leisa Onzo, who is married to the daughter’s 75-year-old father. As the investigation turns into a wild goose chase for the missing girl, the play takes it’s twists and turns in reality and fiction worlds alike.

Staying true to it’s ’40s style investigator movies, the musical is accompanied by a live orchestra, led by conductor Kyle Luck, whose musical accompaniment flows seamlessly with the actors and adds important elements, stingers and transition to the story.

Aside from the storyline, the musical elicits great talent from the cast as members perform their musical numbers throughout the story, led by Vocal Coach Joshua Kranz. In addition to vocal delight, the cast charismatically dances through the lively choreography, arranged by Richard Keller.

“I like the subtleties of [the musical] and I like how there’s so many clever lines,” he said.

“The play brought out serious themes but implemented humorous parts. The characters are really into their roles,” said Joey Tran, physical science.

“It’s not what you expect from a musical.” 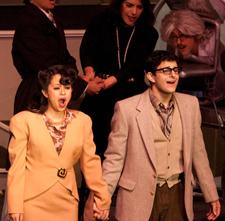 “City of Angeles” opened on Friday in Sexson Auditorium. The musical was directed by Whitney Rydbeck and choreographed by Richard Kuller. The vocal director was Joshua Kranz and Kyle Luck directed the orchestra. It is set in Los Angeles in the late 1940s. (Louis C. Cheung)