“Someone knew what they were doing,” said Glenna M. Watterson, secretary of the Natural Sciences department and primary caretaker of this garden. It was not an accident, the cactus had been cut taking the bud cleanly off, Watterson said.

The defaced cactus was a rare species from Baja that was bought through a grant received from the PCC Foundation, said Dean David M. Douglass of the Natural Sciences Division.

The grant money covered supplies to build a wall dividing the garden and for the acquisition of new species of plants.

“This garden is unique, especially when it was first built,” said Dean Douglass. Its importance is to “bring [us] together as a campus community.”

“Some think, it’s just rocks,” said Watterson. It is not uncommon for her to have to pick up cigarette butts from the garden on the weekends, she said. “But I’ve worked with the garden for 20 years. I know all of my cactuses and what they are supposed to look like.” She knew exactly what happened when she saw it in the garden that day, and she was distressed.

In a letter to the campus, Watterson wrote, “This past weekend while weeding the cactus garden, I noticed that the beautiful bud growing on our beloved Cordon cactus had been taken. I have been nursing that cactus for the past two years to get that bud healthy. Now it’s gone and I am heartbroken.”

No fence for the garden exists, but Watterson and others involved don’t want the situation to come to that point. They want everyone to know that the garden is maintained and does have a valid purpose in the PCC community.

The garden, which has a long standing tradition of 20 years on campus, is monitored and maintained by volunteers, both faculty and students. The Dana Club gives credit to students, such as botany majors, who work in the garden. 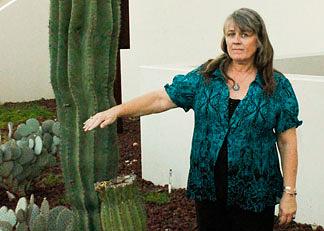 Glenna Watterson, secretary of the Natural Sciences division, indicates where the bud was previously anchored on the twice-damaged cactus plant in PCC’s Rock and Cactus Garden. (Louis C. Cheung)