After the governor’s recent budget proposal to cut $400 million from California community colleges, one of newly elected Board of Trustees President William Thomson’s critical goals is to work with the PCC Foundation to raise money for the college. “Education ought to be the last place to cut and save money. The governor’s proposed budget definitely devastates community colleges,” said Thomson in an interview.

“My goal is to work with our foundation to began to raise significantly larger sums of money than [it] had in the past, because, frankly, we will need it,” said Thomson.

Members of the Board of Trustees elected Thomson on Dec. 18, to serve as board president for one year.

Gov. Jerry Brown’s budget cut proposal could cause the school to lose from $5.3 million up to $16.4 million in the next academic year, resulting in classes and enrollment being cut back.

Thomson also feels there’s a need to improve the communication between the board and the community.

“I want to make sure that everyone who wants to speak on an issue gets a chance to. And we [the Board] bring the issue to a resolution,” said Thomson.

“I want to see us do a better job at communicating with each other from the faculty to students. I want to set up an opportunity to have a campus wide gathering in Feb. or March to discuss any issues so, therefore we all become a collective and cohesive group working with each other,” said Thomson.

Thomson has an extensive history working with the Pasadena community. He was a member of the Pasadena City Council, and served as mayor from 1988 to 1990. He was first elected into the Board of Trustees in 2007, and became the liaison of the board to the PCC Foundation, working with various committees. 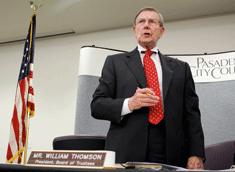 William Thomson concluding the board of trustees meeting at the Craveling Lounge on Tuesday, January 18,2011. (Louis C. Cheung)