After coming up just short in 2008, PCC’s badminton team took the 2009 and 2010 seasons by storm and won the South Coast Conference title two years in a row.
With a career record of 34-7, giving him a nearly 83 percent win percentage, Head Coach Bill Sanchez is expecting a lot out of the 2011 season.
Last season, PCC’s badminton team went 14-1 overall and undefeated in the SCC. Despite their stand out performance, they were edged out by City College of San Francisco when the Lancers hosted the California Community College Athletic Association state championships in May.
“That was the farthest this school has ever been,” said Sanchez, who won the SCC Coach of the Year award for 2010. “It’s exciting. It’s fun to see the kids work hard and get rewarded. They deserve every bit of it.”
The players range from new-to-the-sport to seasoned veterans.
Lena Tsai graduated from the Santa Monica-UCLA Medical Center’s School of Respiratory Therapy in 1983 but, at 50 years old, she is currently attending PCC so that she can be an official member of the team after helping with practice last season.
She has only been playing for about two years, she says, so expects to have fun in the upcoming season.
“I learned from Coach [Sanchez],” she said. “He taught us a lot of good skills like footwork, strategy and good thinking.
“It’s tremendous fun,” she continued. “They should keep the program going so people will come back to school. That’s what a ‘community’ college is for.”
One player PCC should keep their eyes on is sophomore Jessica Nguyen-Le. She was a standout last season, winning the SCC doubles championship with partner Iris Xu, and Sanchez says Nguyen-Le has a chance at going very far this season.
“I’m not the only one that Coach expects a lot out of,” said Nguyen-Le. “I just try my best. This is my last year and I want to make it the best.”
Nguyen-Le is planning to transfer to either CSU Northridge or CSU Fullerton with an associate’s degree in TV and Radio Production, even though she is disappointed that neither school has a badminton team.
“I’m kind of disappointed about that but, you know, it’s just a sport, so I play for fun,” she said. “That’s why right now I focus in school because I want to do my best.”
“We’re hoping we’re going to make as much noise this year as we did last year,” said Sanchez. “What you do is every day you come to practice and compete. You just practice competing.
“You find the best way to really mimic tough competition and try to include it in practice,” Sanchez continued. “[You] hope that when they get in a tough situation in a match that they feel that they’ve been there before so they can do well and make good decisions.”
PCC’s two-time defending SCC champs jump right into conference play with their first match on Feb. 23 against El Camino College-Compton Center at 3 p.m. 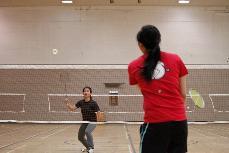