Skip to content
By: Alumni Staff Posted on December 2, 2009

After defeating Trustee Beth Wells-Miller in a hotly contested election for the Area 7 seat on the Board of Trustees, Trustee-elect Anthony Fellow appeared nothing short of confident during a recent interview.Though Fellow is a newcomer to this board, he is not new to the realm of public service, education or politics, nor is he unfamiliar with the PCC campus.

“I’m taking Italian classes [through] the extension program on Saturdays,” he said.

“And I can honestly say that the best Italian teacher I ever had is the one I have now.”

His experience on the PCC campus became an integral part of the platform on which he based his Board of Trustees campaign, which favored a heavy emphasis on the creation of smart classrooms and the possibility of a satellite campus.

In his opinion, the classrooms at PCC are dilapidated and in need of modernization.

Though Fellow understands there is no room to build a satellite campus at this college, he strongly advocates the idea that students need “to have the latest technology in order to learn” and be competitive on a world stage.

“It’s very important for students to study abroad,” he said.

“For a while, the U.S. had this attitude that we’re the greatest and didn’t feel the need to reach out, but it’s backfired now. The U.S. education system is failing.”

The strong opinions come from a career of over 20 years as a professor within the CSU system, as well as several years spent at the University of Southern California.

Trustee Geoffrey Baum, who was recently reelected to his Area 1 seat, met Fellow while they were both at USC’s Annenberg School of Communication and Journalism.

“Fellow is a respected scholar and educator who is deeply committed to student success,” said Baum. “He will bring a fresh perspective and solid experience to his service on the PCC Board of Trustees and I am looking forward to working with him.”

Fellow says he had previously been asked to run for the Area 7 seat four years ago by members of the Arcadia community, where he currently lives, but decided not to run because he was entrenched in completing several projects for the water board.

It was an Aug. 20 op-ed piece in the Pasadena Star-News this year, entitled “PCC in need of leadership,” that finally led Fellow to launch his campaign for the board.

“I ran because there was a void in leadership,” said Fellow. “People were very disappointed in past leadership and that’s what I based my campaign on.

“I think the board is a very learned board, and between [its] members there is certainly a sense of experience, more so than in some city councils. However, the PCC board did not select the right president [with Perfumo]-Lisa Sugimoto is very competent.”

Said President Sugimoto of Fellow: “I look forward to working with him as one of our two new board members. [he has] experience in education and has previously served on boards.”

Fellow has seen the education system from all ends of the spectrum. A former reporter, editor and columnist for Thomson Newspapers, which once owned the San Gabriel Valley Tribune, he was once also the publisher of CSU Los Angeles’ student newspaper and is now in his fourth year as chairman of the communications program at CSU Fullerton.

Education is his passion, but equally important to Fellow is politics, though he wouldn’t be quick to call himself a politician through and through.

“I just like making things better,” he said while speaking about his involvement as a director of the Upper San Gabriel Valley Municipal Water District. “What you do in life is make things better.”

He defines his primary goal on the water board to reclaim clean water for the county: “There are 400 wells in the greater Los Angeles region but so many are closed because of the cancerous materials within them.”

Similar involvement with the Metropolitan Water District of Southern California and a former seat on the El Monte City Council leads one to the conclusion that Fellow has aspirations beyond education.

“I have a passion for politics because I believe in people who have been honest,” said Fellow. “And I ran [for the board] because I was asked, and because there was a void of leadership.”

Born in Bridgeport, Conn., Fellow moved to California when he was six months old and spent his childhood growing up in the San Gabriel Valley. He graduated from Rosemead High School.

“I had a knack for writing,” said Fellow of his high school experience. “I knew early on I wanted to be involved in either history, journalism or teaching. Teaching was in my blood.”

He received his bachelor’s degrees in journalism and history from CSU Los Angeles; his master’s in communication and political science from CSU Fullerton; and went on to complete another master’s and doctorate from USC’s Annenberg School of Communication and Journalism. 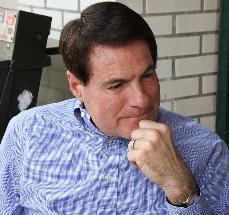