Erick Lemus/Courier PCC students erect a makeshift memorial in the space where an unidentified former student took his own life on Wednesday, Oct. 11 on the roof of parking lot 4.
Main Story,News,Breaking News | | By Allison Stutzka

The Los Angeles County Coroner’s Office told the Courier that the decedent was 20 year-old Gordon Yu from Montebello.

PCC students have set up a makeshift memorial on the roof of parking lot 4 where the former student took his life. There are flowers, candles and a poster where some students have begun to leave written messages for the fallen former Lancer. 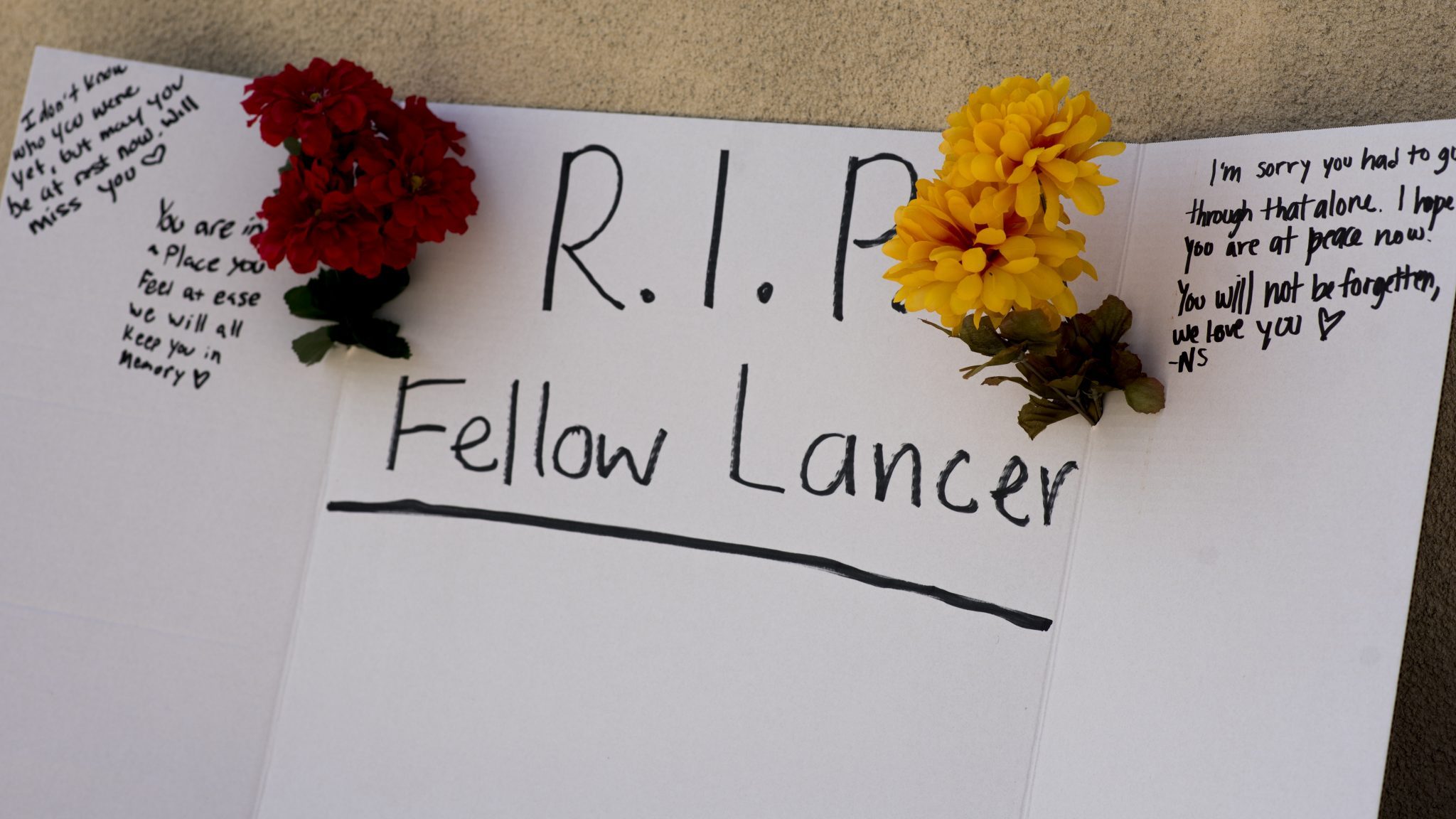 Upon arrival to the scene, the victim was seen by the Pasadena Fire Department to be sitting in the driver’s seat with goggles and gloves, not moving and unresponsive, according to Public Informations Officer Lisa Derderian.

“There was an odor of eggs which is consistent with a sulphur like chemical. That prompted hazardous material units from Glendale, Burbank, and Vernon to respond to assist us,” Derderian said.

“Because of the notes on the vehicle to stay away, we also called the bomb squad from L.A. County sheriffs, but knowing immediately that the environment inside the vehicle would have been unsurvivable, that the victim was determined deceased.”

While the victim was assumed deceased, the department was not able to confirm the death until they were able to receive photos and video from the robot operated by the bomb squad.

When asked how long a person could survive in the atmosphere inside the vehicle, Derderian responded within “minutes, if that.”

“Earlier today, a former Pasadena City College student committed suicide in a parked car on the top floor of Parking Structure 4. Due to the nature of his death, emergency services evacuated the entire parking structure as a precaution against further injury to members of our community,” Vurdien wrote.

“As our hearts go out to the victim and his loved ones, I would like to remind our community that mental health is a serious concern. If you notice anything out of the ordinary in anyone you know, please do not hesitate to refer to our Student Health Services (x7244) or Personal Counseling (x7273) offices, where you will find trained professionals that are able to help.”

Boekelhide told the Courier that the victim was a previously enrolled student at PCC, but not currently enrolled this semester.

School records show victim was not enrolled at PCC, but victim’s name has not been publicly released yet, according to Boekelheide. It is still unclear what, if any, hazardous material was found in or near the vehicle.

Lot 3 is being reopened, and all floors of the parking structure except for the 4th are open as well. Alex Boekelheide, Executive Director of Strategic Communications and Marketing, confirms the victim found in vehicle is deceased in an apparent suicide.

The Los Angeles County Coroner has just arrived on scene and is on the top of the lot 4 parking structure. The victim is deceased and body is currently being removed by the coroner.

The Pasadena Fire Department sent out a tweet adding more information about the identity of the victim but have yet to release the name or if the victim was a student or not.

PCC update: male in 20’s found deceased in vehicle. No threat to public. Personnel to remain on scene until 3:30 pic.twitter.com/LL2s8uePcX

The robot unit is currently still on site with the vehicle.

According to Public Information Officer (PIO) Lisa Derderian from the Pasadena Fire Department, responders began suiting up to go into the parking lot around 1:50 p.m. to package the hazardous material. The victim in the car is believed to be deceased, Derderian said. They are currently waiting for confirmation from the county coroner’s office.

A suspicious black Honda was discovered by PCC students on the roof of parking lot 4 around 11 a.m. today and witnesses said there were several disturbing notes telling passersby to “stay away, do not enter, call 911,” according to Public Information Officer Lisa Derderian who was on scene.

“We’re not saying that yet,” Derderian said in response to a question asking if the incident was an attempted suicide.

The man is currently unconscious and unresponsive. Authorities have been unable to assist the man because of the unsafe conditions involving the vehicle. The bomb squad was alerted and have been working with local authorities to determine the safety of the vehicle.

Sheriff’s department and bomb squad are set to make an entry by breaking windows with a robot to ventilate the vehicle, according to Derderian.

The situation started around 11 a.m. today when the Pasadena police and fire department closed off parking lot 4.

Rave Alerts were sent out to student emails at 11:30 a.m. warning students to stay away and then updated an hour later to avoid lot 3 as well, warning students that their vehicles may be moved without notice due to the incident.

A previous update stated that the victim had been removed from the car at 1:45 p.m. Post has been updated to reflect accurate time.

Amber Lipsey and Reina Esparza contributed to this story.

‘Faculty shouldn’t have to worry…

PCC Sports fans will be…