Fashion week is back, with models and designers excited to showcase their work on the runway. Earlier this week LA Fashion Week, presented by Art Heart Fashion, began its 18th season fashion week at The Majestic Downtown with its iconic high ceilings and chandelier venue. Many people had high hopes for one of LA’s longest-running fashion weeks, and they were exceeded.

Fashion shows are the final product of a collection, with months or years of work presented in one hour.Many of these events had been postponed or even canceled permanently since the pandemic began in 2020 leaving its part-takers questioning whether they would be back or was it time to change careers.

“Everything shut down and you know it kinda got me questioning like what else is out there other than the runway,” model Rachel Sklar said.

Fashion shows are one of the main ways models make money, with walking down the runway being interrupted, models were placed in a terrible position. It was no surprise that the guests and models were excited to see this runway show happen. 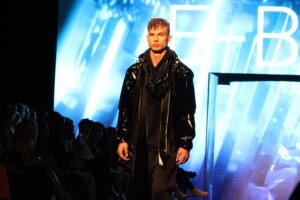 Custo Dalmau, an international designer who incorporated blended patterns and metallics, kicked off the opening show with a bang. The show began with several designs that resembled high quality street fashion with a touch of elegance. They incorporated various bits of textiles that on their own would appear chaotic, but works well on the runway. Custo is well-known for their color palettes, meticulous fabric combinations, and striking designs. A dress, with a turquoise metallic fabric skirt, aligned with a dark blue top with flowing fabric sleeves, brought together with a star strap running down the middle was a fantastic illustration of this. It sounds intense, but far from it. It looks like something a singer would wear to a concert or a performance as the star of the show. Custo is known for designing different pieces for the Runaway Bride, Julia Roberts, Shakira, Christina Aguilera.

Julian Ruiz is a Colombian designer, best known for his menswear collections. He began by influencing people by infusing real-world events into his designs, but also by showcasing how much inspiration can be incorporated into menswear. He incorporated the E-boy look into his designs and he employed metallic bright and dark colors, as well as eye-catching bottom elements. He featured agreements treaties established by different countries on the designs painted onto the models or printed on the pieces , as they strutted down the runway.

“Facing the current situation of a possible third war, we wanted to remember the treaties and agreements already made with humanity,”Julian Ruiz said. “Such as the Paris agreements, the Versailles Treaty, the Rome Statute, the Budapest Agreement, among others”.

Model Will Moncada wore one of the designs that looked so effortless and casual but powerful showing the Treaty of Paris agreements and along with other models that had painted peace signs on their bodies. Hinting at our possible involvement with yet another World War. 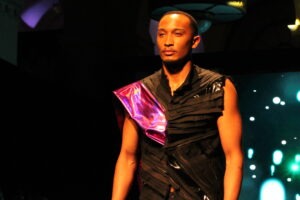 The Art Fashion show did not disappoint. The degree of detail put in place by this fashion show exceeds expectations. After returning from a pandemic in which many who devote their jobs and lives to making these runway events happen truly placed their hearts and efforts . The excitement of the crowd and models made this event a lot more enjoyable. This fantastic way to kick off LAFW by Art Hearts Fashion.