Up in the foothills of Pasadena, Dr. Christopher Matthes and his team begin the procedure to launch a probe to asteroid Psyche. Dr. Matthes does the countdown, and his team members report that Psyche is on its way to the asteroid.

Although Matthes and his team did everything required to launch the Psyche probe, in reality, no probe was launched. The probe was never perched on a rocket ship but instead was laid out flat across a tabletop at JPL. The Psyche mission is set to launch Aug. 1st, 2022, according to NASA, and Matthes and his team were testing the mission before it gets off the ground.

Matthes is a professor teaching engineering at PCC, and he hopes to inspire PCC students to pursue their dream careers. Concurrently, Matthes is part of the team that performs mission scenario tests in preparation for space missions, and the Psyche mission is one of their projects.

The Psyche probe will be a satellite packed with scientific instruments meant to study the surface of asteroid Psyche. Unlike many other asteroids, which are made up of primarily rock and ice, Asteroid Psyche is metallic with a similar composition to Earth’s core, according to NASA.

Understanding asteroid Psyche can give us important insights into Earth’s formation around 4.5 billion years ago. This was when planetesimals – small predecessors to some planets including Earth – are theorized to have been colliding, ejecting pieces of their metallic cores that would become metallic asteroids, according to NASA. Psyche then allows us to take a peek into Earth’s core. This makes the Psyche mission an Earth science mission in essence.

“It turns out it’s much easier to send out a probe to Psyche, an asteroid, than it is to study Earth’s core because it’s 3,000 miles below us.” Matthes said. “That’s the unique thing about space missions, it’s actually something we can do.”

Matthes and his team are in charge of testing space mission maneuvers here on Earth before the maneuvers are attempted in space. These at home tests are critical for preparing for the novel challenges that space missions provide. Alongside the Psyche mission, Matthes works with the Mars 2020 vehicle system test bed named OPTIMISM, a model of the Mars rover Perseverance.

“Having seen it come together from just computer boxes and wires and then putting it on the chassy and then dropping it off in the Mars yard [a stretch of land designed to simulate the surface of Mars] and seeing it drive for the first time, that was like, oh my gosh!” Matthes continued, “it is kind of like a standard engineering job punctuated by very cool moments and experiences.”

Perseverence’s mission is to look for signs of life on Mars. Many of the maneuvers Perseverance will do in its lifetime will have never been done in space. For example, Perseverance housed the first space helicopter, Ingenuity, designed to fly in the thin atmosphere on Mars. Matthes will perform these maneuvers and others on Earth with OPTIMISM before they are attempted on Mars with Perseverance.

Curiosity, Perseverence’s older sister, has shown us that conditions on Mars were habitable for millions or tens of millions of years, according to reporting by NPR. Perseverance can hopefully take our understanding to the next level by preparing samples to send back to Earth where scientists can perform much better experiments than they can on Mars. This is the Mars Sample Return Mission, a mission Matthes is interested in working on in the future.

“It’s beyond anything that we can comprehend at this point and is beyond exciting,” Matthes said.

Matthes is enthusiastic about the community college system, and he is motivated to give PCC students the skills they need to become engineers or succeed in any career.

“I appreciate the students,” Matthes said, “a lot of them are just trying to find out if they are interested in engineering and it’s fun being able to enlighten them to know programming logic and designing parts on computer software, and watching the light turn on for the first time is to me very interesting and exciting.”

Matthes grew up in Michigan and started his engineering education in middle school. He recalls the pressure him and his peers felt to go straight to a four year university. This is part of his motivation for working at PCC.

“I really appreciate the community college structure,” Matthes said, “the idea of having an educational space that is accessible to everybody. To me, it’s a more sustainable model for education.” He continued,  “I want people to feel like it is not a compromise coming to a community college, that it’s the beginning of any future that they want to have.” 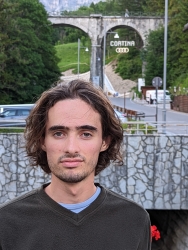