The Shatford Library has expanded its graphic novels collection with over 80 additions recently due to requests from instructors for their class readings, according to Librarian Diana Lopez.

A graphic novel is defined as a fictional story presented in comic strip format and published as a book, according to the Miriam Webster online dictionary.

“There are more instructors using graphic novels in classrooms trying to get students to read,” said Lopez.

One of these instructors is Elsie Rivas-Gomez, a creative writing and composition teacher.

“Graphic novels can be just as complex as texts,” said Gomez, “[and] students tend to be more receptive [to graphic novels].”

Her classes read novels such as “Latino USA, a Cartoon History” by Ilan Stavans and “American Born Chinese” by Gene Luen Yang, which are both multicultural texts on graphic novels. Her required texts discuss graphic novels’ importance to be recognized as complex readings just like other texts, according to Gomez.

Kale Hurtado, undecided, said graphic novels are complex reads as well. “You can analyze every story and every narrative, so why can’t it be the same for comics?” he said.

One example Hurtado cited was the comparing of “Arkham Asylum” by graphic novelist Grant Morrison to “The Cask of Amontillado” written by the poet and writer Edgar Allen Poe. “They are both really complex reads about the same idea of insanity,” he said.

Lopez smiled enthusiastically. “[I] was really excited [by the library’s additions]. It’s a move forward for us in terms of what people want to see in the library.”

Hurtado was disappointed when he did not get into the philosophy of graphic novels class. “For us comic fans, [the reading material] is convenient, like ‘Watchmen’. We already have it on our shelves,” he explained.

The library’s extra editions of graphic novels, once scattered around in different sections are now put into one easy place, on the second floor to the left of the textbook section, to provide more access to students and instructors alike for courses that require graphic novels, said Gomez.

“They’re not cheap,” said Gomez, referring to the cost of graphic novels. “I hope students access them for free [at the library],” she said.

Gomez’s favorite graphic novel, “Return of the Dapper Men” by Jim McCaan and Janet Lee, can cost up to $24 for a hardcover version.

But the library has it, along with four shelves worth of graphic novels available for standard checkout, according to Lopez. 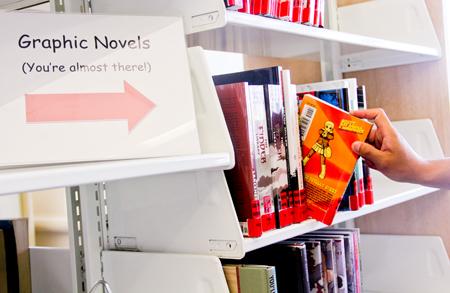