For instructor Ron Berman, teaching students how to play the guitar is more than a job. It’s a passion, one that requires patience, communication, and a love of music.

But before PCC, the thin, dark haired dark highly spirited Berman found out who he was and what his values were, through the music he devotedly pursued and mastered.

“As you play a piece of music, you have the harmony, melody, rhyme, bass, chords; all are put together on this piece of wood and metal you can carry around,” said Berman, explaining the similarities between life and the guitar. “It’s like holding a little universe in your arms; there’s so much music you can get out of it.”

One of Berman’s first teaching jobs in the 70’s consisted of visiting a maximum-security prison in Massachusetts to instruct inmates one-on-one guitar.

Knowing what the inmates were in for was not of Berman’s concern, but rather he pointed out that the important thing was helping them in their willingness to learn. “Ultimately what mattered, were two people sharing music,” said Berman.

Originally, Berman started out playing the clarinet, but because Rock n Roll was so popular with bands like the Beatles, for the young Berman the guitar was its ultimate symbol.

Berman remembered the first strum he took on his brother’s Sears Robuck acoustic guitar. “When my brother finished playing it, I grabbed it and strummed my first chord, saying to myself: wow; this is great!” he said. The rest was history.

In his early twenties, while playing in a summer rock band, Berman got a chance to play alongside headliner bands with professional musicians, sparking an interest to pursue a music career

As an undergrad at North Eastern University, majoring in Music and Journalism, Berman was exposed to the likes of jazz musicians; Miles Davis and John Coltrane, and influential jazz guitarists such as Barney Kessel, West Montgomery, and Jim Hall.

After graduating from North Eastern, Berman took a break, than later got into the New England Conservatory.

Berman smiled, remembering a time when he and a colleague premiered a concerto piece by jazz composer and teacher George Russell.

“George Russell was a wonderful teacher and composer,” said Berman, “he made us feel as if anything was possible,” recalling what Russell had told him, “Just do it, don’t think you can’t do it.”

It is the same philosophy, that Berman patiently instills into his students.

For Berman, when it comes to teaching, patience is a good quality, being able to communicate your passion, and share it with the students in order to light their “fire.”

Daniel Valido, Art, former student of Berman, recalls being encouraged to keep trying his best, “It was his encouragement that made me not give up, and what kept me going was just that.” “I was trying…and Berman influenced that in me,” said Valido. “Every time I play, I’m proud to have been in that class.”

“No matter what anybody tells you, don’t let anyone stomp on your dream,” said Berman, “don’t let anybody tell you; you can’t be this, or you’re too old to start to do that.” “If you truly want to do something and you feel it in your core, you should pursue it.” 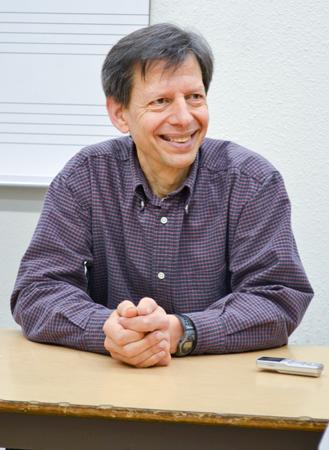 Ron Berman, who teaches Guitar 1 in the V Building, reflects on his 18 years of teaching at PCC. (Max Perez/Courier )

One Reply to “For Instructor, Guitar Is a Life Long Experience”