PCC’s art gallery opened the art exhibit “Odd Fits: Made From Scratch” last Thursday. The title “Odd Fits” is intended both to suggest work that doesn’t conform to preexistent categories and to evoke “fit” in the sense of emotional mood.

Sculptor Yolande Macias McKay curated this exhibition, based on artists who make “a compulsion to manipulate” materials for their sculptures.

“Organization started last May. I went to San Antonio to touch base with Chris Sauter in July. I knew it was going to be based on sculptures from artists with similar ideas as me,” said McKay.

Four artists are participating in the show. Their art styles ranged from textile-based sculptures (Sheila Klein) to a fully built up, street worthy motorcycle (by Jason Wilson).

Artist Wilson is the owner of Sacred Steel, a custom motorbike shop in Duarte. Wilson specializes in hand making motorcycle parts that “are formed with a relationship between owner and builder for a truly life-altering experience,” he said.

Wilson had a series of metal sculptures, some with beautifully hand painted images done by artist Wayne Wreck.

“These pieces take a long time. It takes months to think of, and many hours to paint,” said Wreck.

“The centerpiece bikes panels were not made with power tools, just hand tools. It is totally rideable,” said Wilson.

Chris Sauter, an artist from San Antonio, Texas, bases his art around agriculture, identity, industry and science. Prior to the opening of the exhibit, Sauter spoke about his past and present works, his ideals on art and a sample of the shows he has participated in the past.

Sauter has a recurring theme of telescopes, field plows and organic material for symbolism of origin and creation.

“Origin is something I’ve been really concentrating on, it all started with biology and then it evolved into my curiosity with origin,” he said.

Sauter provided sculptures of models of electrical towers made from wheat stalks and a large colorful ovary with a miniature crane atop of it.

Jacqueline Dreager, an artist based in Los Angeles, expressed an interest in an early age.

“My father was in the movie set industry, he is my main inspiration. They use a lot of fiberglass and resin in movie sets. Those materials are what I use most to make things,” she said.

Dreager said there is no set time in making a piece of art. “You have to pull all the odd fits together” said Dreager.

Dreager exhibited a video called “Pod” in which a pair of strangely attired beachgoers gallivant on the shore, and an a series of abstract pieces made of resin.

Sheila Klein, an artist from Seattle also displayed her work. Pieces based on architecture and textiles were presented in the show.

“Architecture is my main premise. I’ve done several major pieces here in Southern California, including a mural at LAX, public art pieces at the Hollywood Highland metro station and a series of lighting fixtures under the 10 freeway underpass between Los Angeles and Santa Monica,” said Klein. 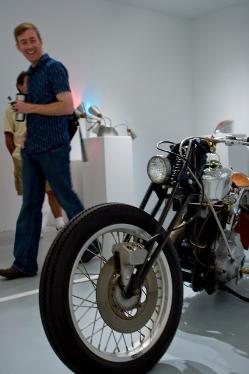 Jason Wilson’s handcrafted motorcycle is on display in the Art Gallery and viewers seem impressed with his work. (Szilvia Gogh)

Latest posts by Alumni Staff (see all)
Categories: A & E