Skip to content
Michael Leyva/Courier The mirror pools at Pasadena City College have yet to be fixed as of Monday, January, 24 2022. Due to damage in the foundation, the pools are not filled and do not have much of a mirror effect.
By: Richard Reyes Posted on February 9, 2022February 12, 2022

After decades of maintenance, the Mirror Pools still present headaches for the PCC administration after years of leaking water, a dilapidated water filtration system, and stubborn carob trees that rest alongside the pool’s edge.

In the early ‘30s, a magnitude 6.4 earthquake off the coast of Long Beach caused structural damage to what was then known as Pasadena Junior College. Over the next few years, the institution went through a dramatic reconstruction phase to rebuild the damaged structures to provide an adequate learning space for future generations of Lancers.

One of the newest additions to the campus would be the Reflecting Pools, commonly known to proud Lancers as the Mirror Pools, which architect Cyril Bennett designed.

In addition to the Mirror Pools, Bennett designed the Pasadena Civic Auditorium and the Raymond Theatre here in beautiful Pasadena, California. The iconic point of interest at Pasadena City College has offered students shade and a perfect location to have a moment of reflection. 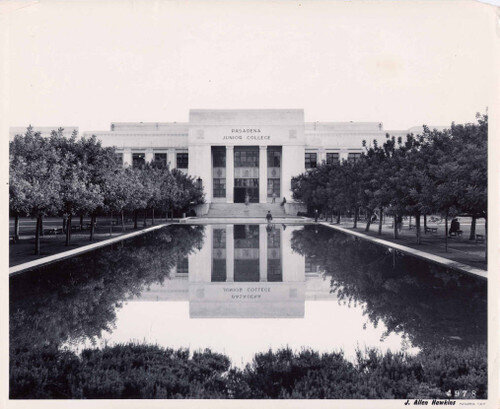 (Reflecting Pools, courtesy of the Pasadena Museum of History)

The reconstruction process brought hardships for the administration, students, and teachers who all had to pivot their learning experience, much like students of today who switched to remote learning due to the Covid-19 pandemic. Teachers and students crammed into makeshift classrooms comprised of tents called “Tent City.” Students attended class in these tents during harsh weather, obscure lighting, and little ventilation. Students had to sit in tents during heavy rain periods with their feet soaked in water and full of mud. Students would also complain about hearing lectures and loud talking from the tent next door because the tents were so close to each other.

(Students lining up to enter makeshift classrooms comprised of tents)

In the Fall of 1937, Pasadena Junior College was ready for students to occupy the newly constructed buildings full of new classrooms. Along with freshly erected buildings, one of the latest additions to the campus was the iconic Mirror Pools located in front of the C building on Colorado Street. The twin pools featured a ledge, allowing students and visitors to sit on while relaxing under the shade provided by nearby carob trees. 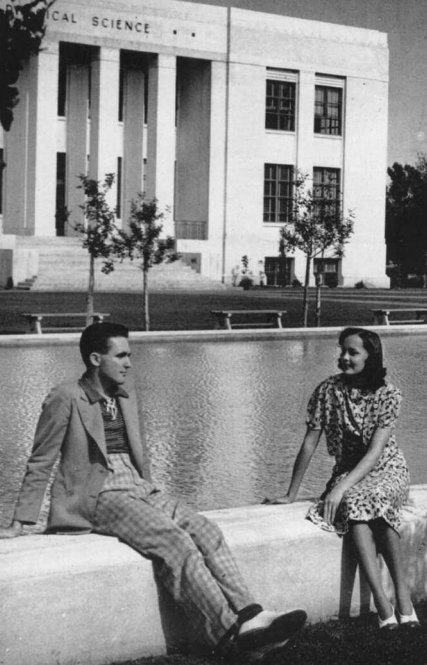 (A couple sitting at the Mirror Pools with smaller carob trees growing in the background.)

The Mirror Pools have been through a lot throughout their existence. The pools have endured the post-World War II era, countless earthquakes, a snowstorm in 1949, and decades of heavy maintenance. However, the persistent struggles to maintain the pools have been consistent for decades. 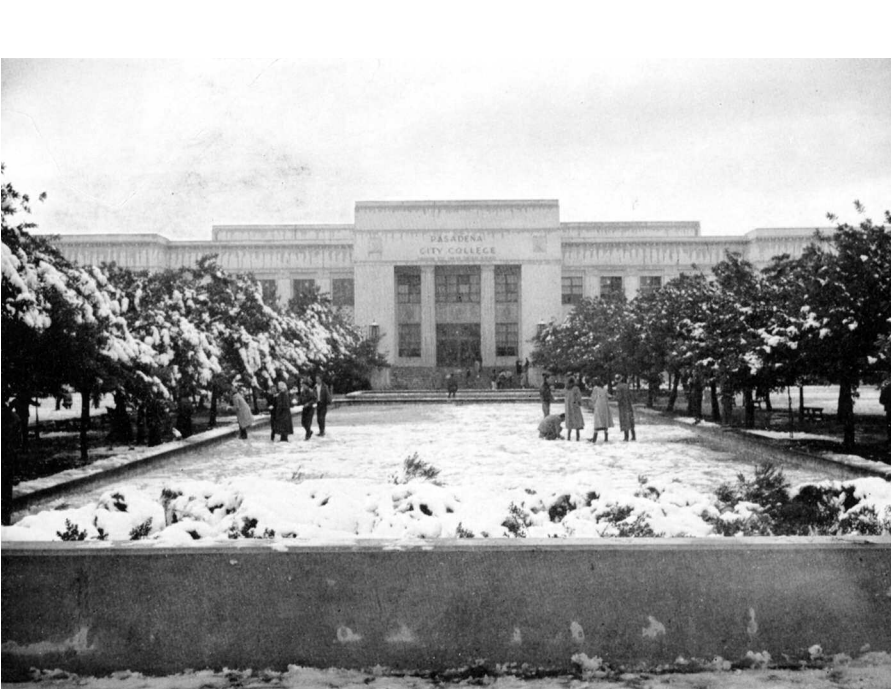 (Lancers playing in the snowstorm of 1949. Courtesy of PCC’s 75th-anniversary book)

In 1987, a rotten carob tree near the pools had split and nearly hit attendees of a graduation ceremony a few feet away. Leaking had begun to occur over the decades and had affected the rooting system of the trees. Officials inspected the trees, and they had no other decision to uproot over 20 rotten carobs. Work included a new water filter system and installing root control barriers to prevent the roots from reaching the pools. According to an article by the LA Times in 1987, it was estimated up to $500,000 for the Mirror Pool maintenance.

So what about now? 35 years later, the Mirror Pools still lack much water it once retained. According to PCC spokesperson Alex Boekelheide, there are plans for maintenance for the Mirror Pools.

“After years of use and general wear and tear, the pools need resealing and attention paid nicely to the pumping system,” Boekelheide said. Boekelheide mentioned the pools are having difficulty with water retention.

When asked if plans to begin the maintenance, Boekelheide said the school needs to request the state budget funds to help the mirror pools. But don’t fret, “There are plans to have the mirror pools retrofitted by 2024 for the 100th anniversary of the school,” Bokeleheide said.